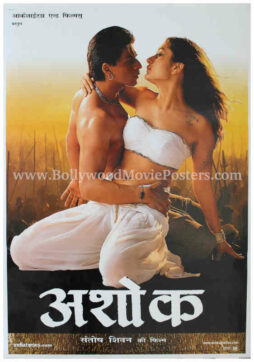 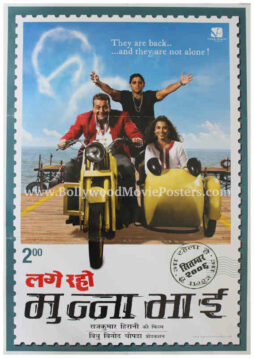 Printed and circulated during the debut release of the film (somewhere in 2003), this Munna Bhai MBBS poster was originally designed for publicity of the film but never ended up being used.

Munna Bhai M.B.B.S. achieved silver jubilee status (25-week run) being one of only eight films to have achieved this status since the year 2000. The two lead characters of the film, “Munna Bhai” and “Circuit” played by Sanjay Dutt and Arshad Warsi respectively, have become iconic and instantly recognizable over the years.

This Munna Bhai MBBS poster features Sanjay Dutt in a full length photograph. He is seen wearing a lab coat and holding a pen to his ear. The typography used in this old Bollywood movie poster is entirely in Hindi, except a line at the bottom in English that reads, “Statutory Warning: He might just cure you.” The title appears written creatively on a prescription note stuck with a band aid. A line at the top of this Sanjay Dutt poster reads, “No Tension Apun Hai Na.”

The entire poster is set against a minimal white background. Actors Arshad Warsi, Gracy Singh Sunil Dutt, Jimmy Shergill and Boman Irani are seen in a smaller photographic still at the bottom of this Munna Bhai MBBS poster.

Munna Bhai M.B.B.S. is said to be inspired from the 1998 American biographical comedy Patch Adams. The film’s massive success led to a sequel called Lage Raho Munna Bhai that was released three years later in 2006. Production of the third Munna Bhai film installment starring Sanjay Dutt in the title role is believed to have begun in 2020.

Soundtrack album of the film was composed by Anu Malik which became a massive success at the time of the film’s release. The film inspired four regional remakes – in Tamil, Telugu, Kannada and Sinhala.