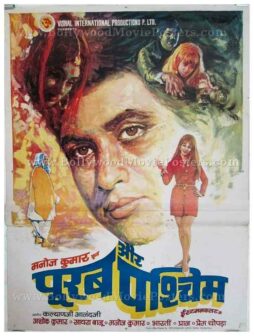 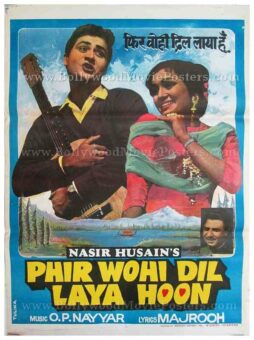 This is an actual poster of the 1969 romantic film written, produced and directed by Nasir Hussain.

This poster was originally designed by cutting out images of actors from separate still photographs (shot on set location) and pasting them on a board. The background as well as typography are hand drawn / hand painted, which makes this poster an interesting mix of two very different design techniques.

In the poster, the lead couple is seen in a romantic pose, accentuated by stars and sparkles in the dreamy background. The typography of the poster is entirely in English, except for a translation of the title into Devanagari Hindi.

It is one of the only two films in which one of the greatest Bollywood music directors of all time, Rahul Dev Burman played a role in (in addition to composing music for the film), the other being Bhoot Bungla.

The theme song (Tum bin jaoon kahan) is one of the only songs in Bollywood sung by both leading singers Mohammed Rafi as well as Kishore Kumar in the same film.