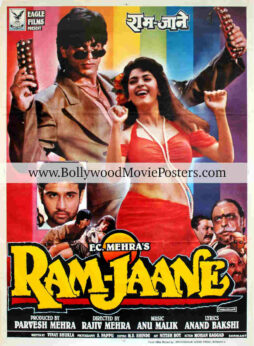 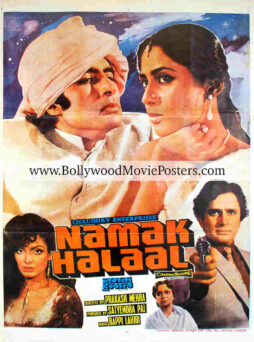 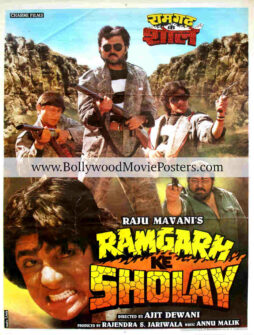 The film won Shahrukh Khan the Screen Award for Best Actor. Ram Jaane is one of the rare films of the Bollywood Baadshah’s career in which he played a negative role, making this Shahrukh Khan poster highly collectible!

Printed and circulated during the debut release of the film in theaters (somewhere in 1995), this Ram Jaane poster was originally designed for publicity of the film but never ended up being used.

Superstar Shah Rukh Khan (SRK) is seen in this classic Bollywood poster holding a ghungroo (anklet) in each hand on the top. Actress Juhi Chawla appears in a stunning red dress alongside, wearing a string of pearls. Smaller still photos of Vivek Mushran, Pankaj Kapur, Puneet Issar, Tinnu Anand and Gulshan Grover are seen at the bottom of this Ram Jaane poster.

Typography used in this Bollywood poster is completely in English, with a translation of the title in Devanagari Hindi appearing on the top. The English title appears in a stunning yellow font encased in a red border at the bottom of this Ram Jaane poster .

The soundtrack album of the film was composed by Anu Malik, while lyrics were written by Anand Bakshi. Songs like “Pump Up The Bhangra” sung by Bali Brahmbhatt and “Phenk Hawa Mein Ek Chumma” sung by Abhijeet became a rage throughout the nation at the time of the film’s release and are fondly remembered till today.