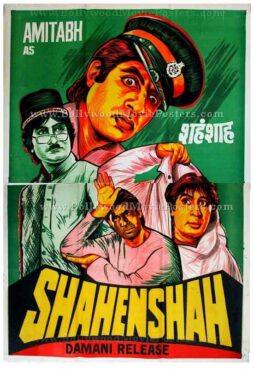 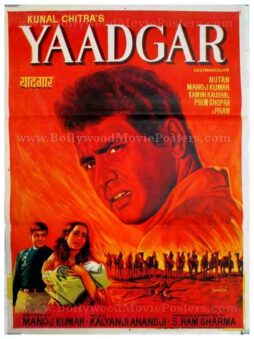 This two sheet poster measures an amazing 80″x30″ inches in size when its two individual sheets are joined or pasted together. The poster comprises two separate single sheets, each measuring 40″x30″ inches.

This is an actual surviving two sheet poster of the super hit classic Shahenshah that featured the angry young man of Indian cinema, Amitabh Bachchan in a superhero avatar. Printed and circulated somewhere during the release of the film, this quirky, hand drawn old Bollywood movie poster was originally designed for publicity of the film but never ended up being used.

This poster was originally designed in hand painted format using oil paints on canvas by a small time art studio, giving it a very quirky hand drawn appearance. This eccentric, old hand painted Bollywood movie poster captures the original angry young man of Bollywood, Amitabh Bachchan, in four different avatars – featuring some of his most iconic poses such as holding out his metal braced arm in his superhero suit and fighting with a crutch.

This quirky, hand drawn old Bollywood poster is in absolutely top notch condition, with the exception of slight discoloration of the paper – due to which, it has been graded as Near Mint.

Shahenshah (translated as Emperor) is a 1988 Bollywood superhero film starring Amitabh Bachchan in the title role. Produced and directed by Tinnu Anand, the film marked Amitabh Bachchan's comeback after a three year break during which he had entered politics. The film went on to become a super hit and is widely regarded today as one of the most memorable superhero films ever made in Bollywood. Amitabh Bachchan's Shahenshah costume is remembered till today, as is his unforgettable dialogue in the film, “Risthey Mein Toh Hum Tumhare Baap Lagte Hain, Naam Hai Shahenshah.”