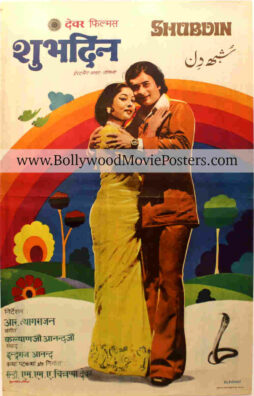 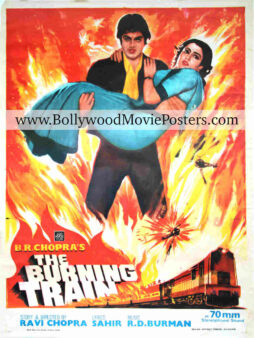 This is an actual surviving vintage Bollywood poster of the 1974 old Hindi movie directed by P. Thyagarajan that starred Shashi Kiran in the lead role.

Printed and circulated during the theatrical debut release of the film (somewhere in the early 1970s), this old Indian movie poster was printed for publicity of the film but never ended up being used.

This rare vintage Bollywood poster was originally designed using a combination of both hand painted as well as photographic techniques.

The lead couple is seen in a stunning full length photograph prominently in this poster. A snake (King Cobra) is seen besides the man. A rainbow appears in the animated background, above retro artwork styled trees. Typography used in this old Indian movie poster appears in all three languages – English, Hindi and Urdu.

The retro theme and colorful appearance of this vintage Bollywood poster are complemented by blank relief spaces on the top and bottom.