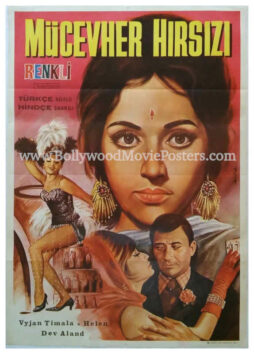 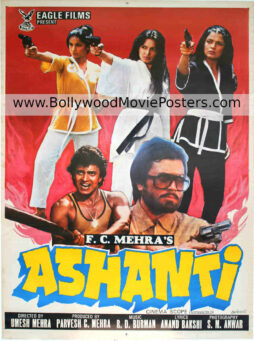 This is an actual surviving rare Shahrukh Khan poster of the cult Hindi film released in the year 2004 that was written, produced and directed by Ashutosh Gowariker. The “King of Bollywood,” superstar Shahrukh Khan starred in the lead role, while Gayatri Joshi, Kishori Ballal, Rajesh Vivek, Daya Shankar Pandey and Makrand Deshpande played supporting roles in the film.

Swades is inspired by the true story of Aravinda Pillalamarri and Ravi Kuchimanchi, an NRI couple who returned to India to serve society by developing a generator to power village schools. The film was inspired from a Kannada movie called “Chigurida Kanasu,” which was based on a novel of the same name.

Swades holds the distinction of being the first Indian film to be shot inside NASA’s headquarters. The film received widespread critical acclaim following it’s release and is counted as one of the finest performances of the Bollywood superstar’s film career, making this Swades poster highly collectible!

Printed and circulated during the debut release of the film (somewhere in the year 2004), this Swades poster was originally designed for publicity of the film but never ended up being used.

This Swades movie poster features an iconic still photograph from the film. Superstar Shahrukh Khan, Rajesh Vivek and Daya Shankar Pandey are seen riding tripe seat on a scooter. A rustic village landscape is seen in the background. Captalizing on filmmaker Ashutosh Gowariker’s earlier massive success Lagaan, this Swades poster announces at the top, “From The Writer and Director of the Academy award nominated Lagaan.” The title of the movie appears in a soothing cloud white colour with the tagline, “We, The People” on the top of this Swades poster.

The soundtrack of Swades composed by A. R. Rahman with lyrics written by Javed Akhtar was a stellar success. Songs like “Yun Hi Chala Chala” sung by Udit Narayan, Kailash Kher & Hariharan and “Yeh Jo Des Hai Tera” sung by A. R. Rahman are fondly remembered and played till today.