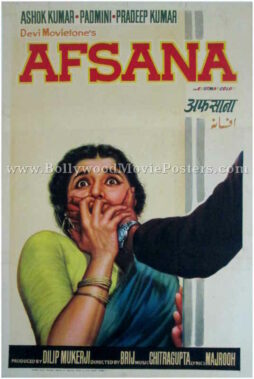 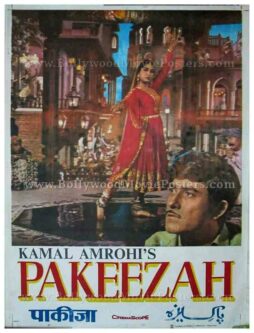 This is an actual poster of the 1981 film that featured Rekha in the lead role, playing the character of a courtesan. Printed and circulated several years after the first release of the film (somewhere in the 1980s/1990s), this movie poster was originally designed for publicity of the re-release of the film but never ended up being used.

In this vintage Bollywood poster, the lead protagonist of the film, Rekha is seen in her spectacular best in an iconic dancing pose. A large cut out of Rekha from a still photograph has been pasted on a blank background. The typography used in this poster is primarily in English, with only the title translated in Devanagari Hindi as well as Urdu.

Umrao Jaan is a 1981 award winning Hindi film based on the Urdu novel Umrao Jaan Ada that tells the story of a famous courtesan. The film starred actress Rekha and Farooq Shaikh in lead roles.

The soundtrack of the film went on to become a rage throughout the nation. Composed by Khayyam, several songs from Umrao Jaan are considered the greatest ever penned in Bollywood. “Dil Cheez Kya Hai” and “In Aankhon Ki Masti” in particular are played till today.

Umrao Jaan went on to win several awards at the National Film Awards, primarily for its music. Rekha bagged the award for best actress of the year for her lead role in the film.

Following the success of the film, a remake was released in 2006 starring former Miss World Aishwarya Rai as Umrao Jaan.