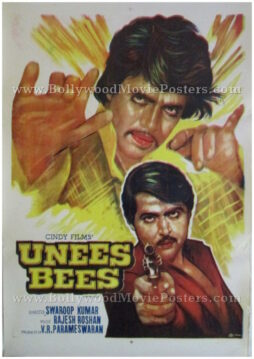 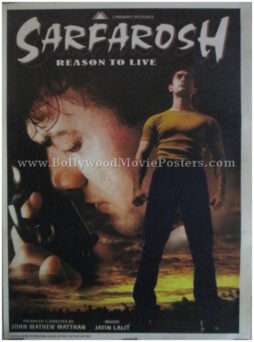 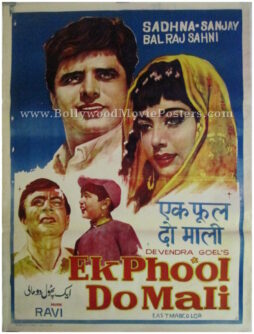 This is an actual surviving old Bollywood poster for sale of the 1980 Hindi film that starred Mithun Chakraborty, Rakesh Roshan and Kader Khan in lead roles.

Printed and circulated a few years after the original first release of the film (somewhere in the 1980s), this old Bollywood movie poster for sale was printed for publicity of the film but never ended up being used.

Unees Bees marked the Bollywood debut of one of the greatest playback singers in Indian cinema, Udit Narayan. The soundtrack of Unees Bees was composed by music director Rajesh Roshan who gave Udit Narayan the opportunity to sing his first Bollywood song, “Mil Gaya Mil Gaya” along with veteran singer Mohammed Rafi in the film.

Udit Narayan has sung over 30,000 songs and remains the only male playback singer in the history of the Filmfare Awards to have won awards over a period of three decades, making this old Bollywood poster highly collectible!

This old Bollywood poster was originally designed in hand painted oil on canvas format by a small time art studio in Delhi. Quirky hand drawn portraits of lead stars Mithun Chakraborty and Rakesh Roshan are seen in this old Bollywood poster. The poster is set against vibrant hand painted brush strokes with the lettering at the bottom appearing in a stunning yellow font.