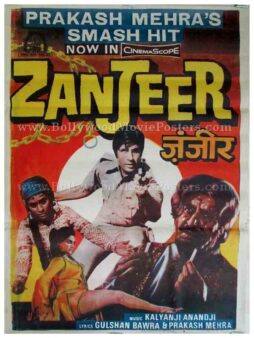 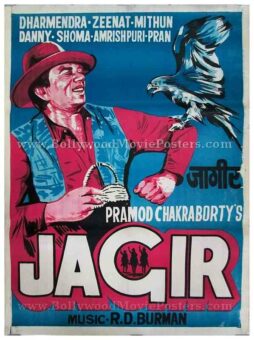 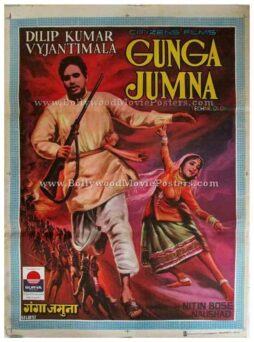 This is an actual surviving vintage poster of the 1973 film that featured the greatest superstar of Indian cinema, Amitabh Bachchan in the lead role.

Zanjeer is responsible for breaking the consistent trend of romantic films in the 1970s and for steering Indian cinema towards the action genre. The film pioneered superstar Amitabh Bachchan’s new image as “The Angry Young Man” of Bollywood. The film also ended the hugely successful era of superstar Rajesh Khanna (who delivered back to back hits for several years) and paved the way for superstar Amitabh Bachchan to dominate the box office for years to come.

Printed and circulated a few years after the release of the film (somewhere in the late 1970s), this old Amitabh movie poster was originally designed for publicity of the film but never ended up being used.

This vintage Bollywood poster was originally designed by cutting out images of actors from separate still photographs (shot on set location) and pasting them on a board. The typography is hand drawn / hand painted, which makes this poster an interesting mix of two very different design techniques.

In the poster, superstar Amitabh Bachchan is seen prominently in the center holding a pistol wearing a police uniform. Still photos of other supporting actors from the film, Jaya Bhaduri, Bindu and Pran are seen at the bottom.

Zanjeer was a super hit at the box office and is regarded as an important film in the history of Indian Cinema. Songs from the film became a rage. “Yaari hai imaan mera” sung by Manna Dey is played till today.

The film’s cult success inspired a remake with the same name. Released in 2013, it starred Ram Charan and Priyanka Chopra.