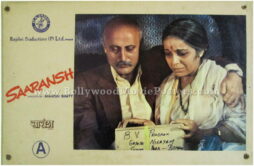 This is an actual surviving set of eight old Bollywood lobby cards of the 1973 Hindi film that starred the evergreen star of Bollywood, Dev Anand in the lead role along with dream girl Hema Malini and actress Raakhee.

Printed and circulated during the original first release of the film (early 1970s), this set of eight Dev Anand old photo stills was designed and printed to be used for publicity of the film inside a cinema hall as lobby card display.

Directed by Yash Chopra, Joshila was a Bollywood thriller that starred Dev Anand, Raakhee and Hema Malini in prominent roles.