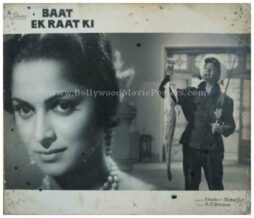 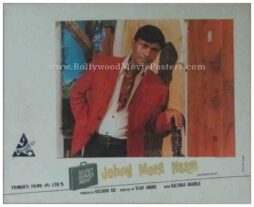 This is an actual surviving set of old Bollywood lobby cards of the 1963 hit Hindi film that starred the Evergreen star of Bollywood, Dev Anand in the lead role opposite Nutan.

Printed and circulated during the original first release of the film (early 1960s), this complete set of 20 Dev Anand old photo stills was printed for publicity of the film inside a cinema hall.

These old black and white Dev Anand photo stills were actually used inside a cinema foyer that screened Tere Ghar Ke Samne! The corners of this old Bollywood lobby card set display visible pin hole markings – tell tale signs of being pinned on the notice board of a movie theater.