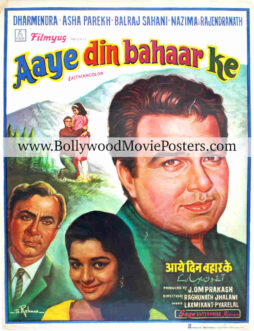 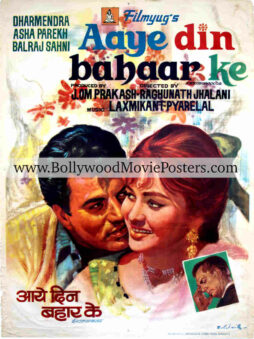 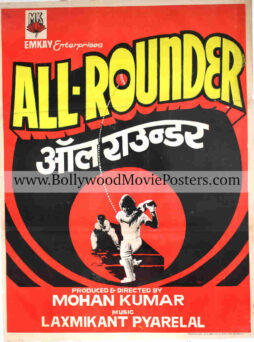 Printed and circulated during the release of the film in theaters (somewhere in the 1960s), this old Bollywood film poster was originally designed for publicity of the film but never ended up being used.

This Aaye Din Bahar Ke movie poster was originally designed using mixed design techniques – i.e. a combination of both hand painted art as well as photographic still collage by a movie poster art studio in Bombay. The signature of Bollywood film poster artist S. Rehman painter is seen printed on the bottom left hand corner of this original poster. A large hand painted portrait of actor Dharmendra is seen prominently in this Bollywood film poster. Actor Balraj Sahni appears in a smaller hand painted portrait at the bottom left, while actress Asha Parekh is seen in a photographic still. The lead couple is seen romancing in a smaller photographic still in the background.

The poster is set against a romantic hill station backdrop. The title of the film appears in striking multi-color typography on the top in English – with each word painted in a different shade. A translation of the tile in Devanagari Hindi and Urdu is seen on the bottom right of this Bollywood film poster.