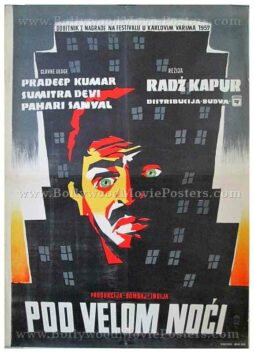 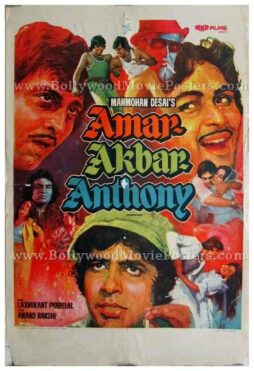 This is an actual surviving old Bollywood poster of the Hindi film Shree 420 (translated as Mr. 420 and sometimes also spelled as Shri 420).

Shree 420 is a 1955 Bollywood classic directed and produced by the Showman of Indian cinema Raj Kapoor, featuring him in a leading role opposite Nargis. Printed and circulated somewhere in the 1970s, this vintage Bollywood movie poster was originally designed for publicity of the re-release of the film but never ended up being used.

This old Raj Kapoor film poster was originally designed in hand painted, oil on canvas format by a small time art studio in Delhi, giving it a very quirky appearance. The entire poster has been printed in a single vintage ink blue color, presumably to bring down the cost of printing. The three leading characters of the film are seen in beautifully drawn vintage portraits in this Shree 420 original movie poster. The emotion in Nargis’ portrait has been captured beautifully by the artist. Raj Kapoor appears in his classic Tramp avatar in this old hand painted Bollywood poster.