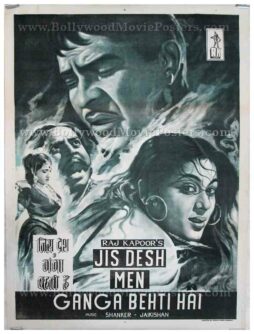 This is an actual surviving poster of the 1982 film that featured the biggest superstar of Indian cinema, Amitabh Bachchan in a double role. Bemisal won critical acclaim and Amitabh Bachchan’s performance in the film is considered one of his finest till date.

Printed and circulated during the first release of the film, this vintage movie poster was originally designed for publicity of the film but never ended up being used.

This old Amitabh poster was originally designed on a hand painted canvas, making it very collectable. It features a spectacularly accurate side profile of Amitabh Bachchan, hand painted in a variety of shades to capture the density of his character. Actress Raakhee is seen in yet another fantastic rendition on the side of the poster, whereas the two supporting actors Vinod Mehra & Deven Verma appear on the top. The typography used in this old Amitabh poster is completely in Devanagari Hindi, except for a translation of the title into English.

Bemisal (Unprecedented) is a 1982 Hindi film directed by Hrishikesh Mukherjee starring the greatest superstar of Indian cinema, Amitabh Bachchan, in a double role.

Amitabh Bachchan won critical acclaim for his flawless performance as both doctor and (mentally insane) patient in his double role. The film is regarded as one of his best acting performances till date.