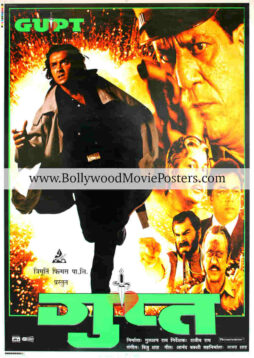 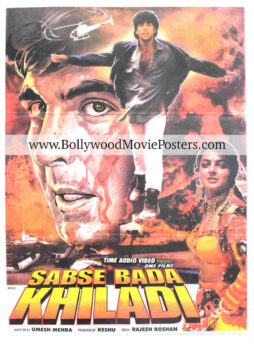 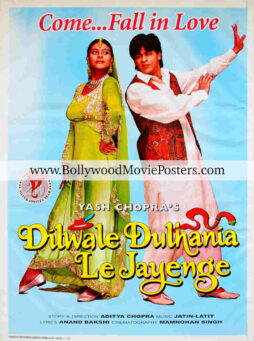 Printed and circulated during the screening of the film in theaters (somewhere in the late 1990s), this Gupt movie poster was designed for publicity of the film but never ended up being used.

Kajol became the first actress in the history of the Filmfare Awards to win the Best Performance in a Negative Role, making this Gupt movie poster, highly collectible!

This classic Bollywood film poster has been designed using photographic collage techniques. A stunning large full length still photograph of lead actor Bobby Deol is seen on the left of this Gupt movie poster. Om Puri is seen in a close up alongside on the right, taking aim from a pistol. Supporting actors Prem Chopra, Paresh Rawal, Sharat Saxena and Tej Sapru are seen in smaller close up stills at the bottom of this classic Bollywood poster.

The title of the film is seen both in English at the top as well as in Hindi prominently at the bottom. A dagger is seen piercing a heart in the logo, suggesting the murder mystery theme of the film. Typography used in this Gupt movie poster is entirely in Devanagari Hindi, except for the title that has been translated in English.