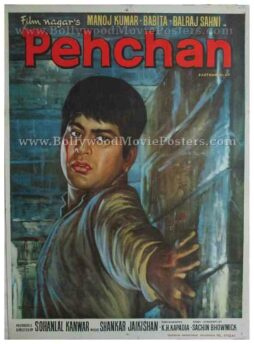 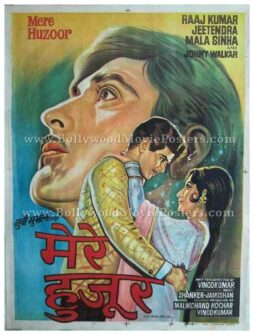 This is an actual surviving original vintage Bollywood movie poster of the 1969 Hindi film that featured Dharmendra (popularly referred to as the “He-Man of Bollywood” for his action-packed roles) in the lead role opposite actress Vyjayanthimala.

This was the only movie in which Dharmendra and Vyjayanthimala were paired together, making this poster highly collectible!

This old Bollywood movie poster was originally hand painted on canvas by a leading poster design studio in Bombay. A stunning portrait of Vyjayanthimala dancing is seen prominently on the poster. A smaller hand painted portrait of Dharmendra playing the trumpet is seen below. This vintage Bollywood poster has a simplistic plain background accentuated with blue streaks.