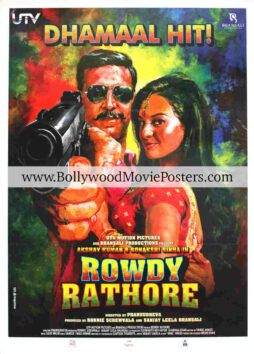 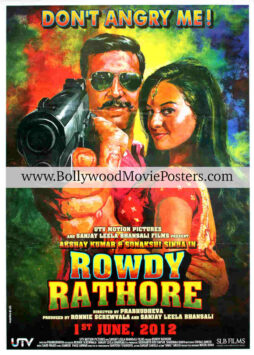 Rowdy Rathore starred Akshay Kumar in a double role along with Sonakshi Sinha. The movie was a blockbuster hit, becoming one of the highest-grossing Indian films at the time of its release, making this Rowdy Rathore film poster, highly collectible.

Printed and circulated during the debut of the movie in theaters (somewhere in 2012), this Rowdy Rathore film poster was printed for publicity of the film but never ended up being used.

In 2011 prior to the film’s release, producer Sanjay Leela Bhansali wanted to capitalize on the unique old world charm of hand painted Bollywood posters – an art form which faded out in the early 1990s. Old movie poster painters in India were hired to make a hand painted Bollywood film poster for Rowdy Rathore instead of a digitally designed poster as is the norm in the digital age.

This original Rowdy Rathore film poster features stunning hand painted portraits of lead couple Akshay Kumar and Sonakshi Sinha. Knife work is used to hand paint the face of superstar Akshay Kumar to give him a rugged and macho look. He is seen wearing aviator glasses in this Rowdy Rathore film poster and sporting his trademark handlebar mustache. The superstar is seen taking aim from a pistol in one hand, and holding his lady love in his other hand.

Beautiful patchy brush strokes of different colors including red, green, yellow and blue are seen as an explosion of hues in the background of this hand painted Bollywood movie poster, gives it a stunning appearance. The top of this Akshay Kumar movie poster reads, “Dhamaal Hit (Entertaining Hit).” A stunning illustrated font is used in making the title of this hand painted Bollywood poster. The release date of the film is announced at the bottom of this Rowdy Rathore film poster in a striking red font.