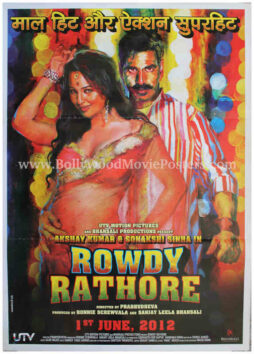 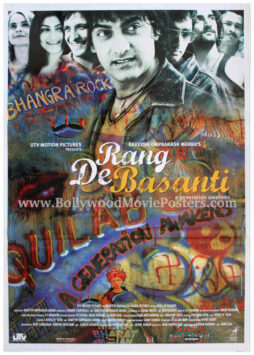 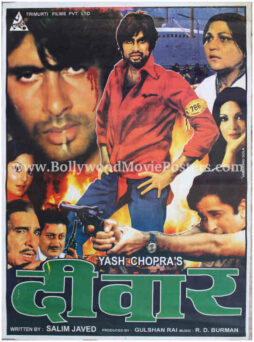 This is an actual surviving original Rowdy Rathore film poster of the action packed Bollywood drama, which was produced by Sanjay Leela Bhansali and directed by the dancing sensation of India, Prabhu Deva.

Rowdy Rathore starred Akshay Kumar in a double role along with Sonakshi Sinha. The film was a blockbuster hit, becoming one of the highest-grossing Indian films, making this Akshay Kumar movie poster, highly collectible.

Printed and circulated before the original first release of the film in 2012, this Akshay Kumar movie poster was printed for publicity of the film but never ended up being used.

In 2011 prior to the film’s release, producer Sanjay Leela Bhansali wanted to capitalize on the re-emergence of old school hand drawn Bollywood posters – an industry which had faded out since the early 1990s. Bollywood poster painters were hired to make a hand drawn movie poster of the film instead of a digitally designed poster as is the norm in the digital age.

In this beautifully illustrated Rowdy Rathore poster Akshay Kumar and Sonakshi Sinha are seen in stunning hand drawn avatars. Knife work is used in hand painting the face of superstar Akshay Kumar to give him a rugged and macho look. His eyes are hand painted red to give his character a tough piercing look. Actress Sonakshi Sinha is seen alongside in a very artistic hand drawn portrait, wearing a beautiful see through saree. The amazing combination of red, yellow, orange, blue, pink and gold hues used in the design of this hand drawn Bollywood poster give it a very catchy appearance.