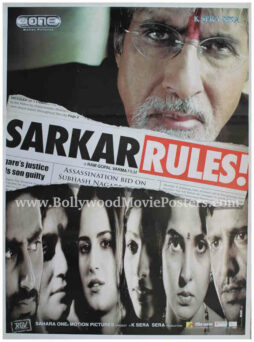 This is an actual surviving Amitabh Bachchan film poster of the 2005 Hindi crime thriller directed by Ram Gopal Varma that was based along the lines of the all-time American classic, The Godfather.

The blockbuster film was premiered at the New York Asian Film Festival and has been archived at the American Academy of Motion Pictures library. Just like the Godfather Trilogy, two sequels of Sarkar were subsequently released – Sarkar Raj in 2008, and Sarkar 3 in 2017, making this original Sarkar part 1 poster highly collectible!

Printed and circulated prior to the first release of the film (somewhere in 2005), this Sarkar movie poster of Amitabh Bachchan was originally designed for publicity of the film but never ended up being used.

Superstar Amitabh Bachchan is seen in a large close up on the top of this Sarkar Hindi movie poster. Abhishek Bachchan, Supriya Pathak, Katrina Kaif, Tanisha Mukherjee, Rukhsaar Rehman and Kay Kay Menon are seen in close up black and white stills at the bottom. A newspaper strip is seen on the center of this Sarkar movie poster of Amitabh, which features the title, “Sarkar Rules!”