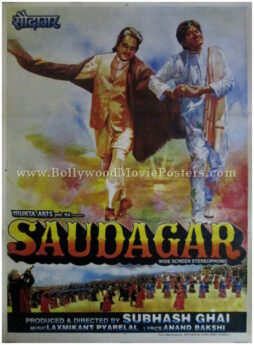 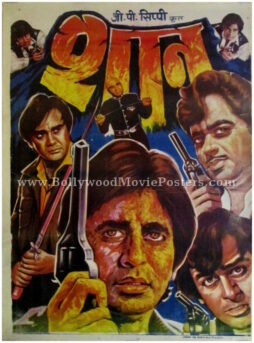 Featured here for sale is a reissue Bollywood poster of the 1980 classic Hindi film which featured the greatest superstar of Indian cinema, Amitabh Bachchan in the lead role.

This old Amitabh poster features two photographic stills of the superstar. Amitabh Bachchan is seen holding a gun along with Shashi Kapoor on the top and again on the center of this Shaan poster. Smaller photographic stills of supporting actor Shatrughan Sinha and Bollywood’s infamous villain Kulbhushan Kharbanda (who played the memorable character of Shakaal in the film) are seen on the bottom of this Shaan poster.