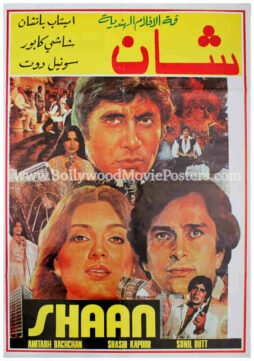 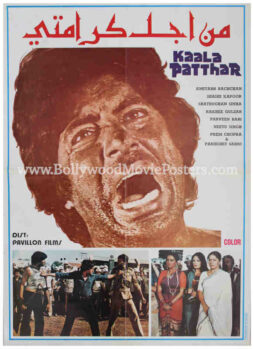 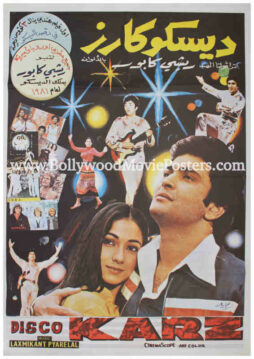 Featured here is an original old Bollywood poster of the 1980 classic Hindi film which featured the greatest superstar of Indian cinema, Amitabh Bachchan in the lead role.

Printed and circulated during the international release of the film in the Middle East somewhere in the 1980s/1990s, this Shaan poster was originally designed for publicity of the film but never ended up being used.

This old Amitabh Bachchan poster features a stunning combination of both hand painted artwork as well as photographic collage techniques. The superstar is seen on the top in an over painted close up photo. Large close ups of Shashi Kapoor and Parveen Babi are seen below in this Shaan movie poster. The title of this Amitabh Bachchan poster appears on the top in Lebanese with an English translation below.

Smaller photographic stills taken from key scenes in the film are seen in the background of this Amitabh postrer.