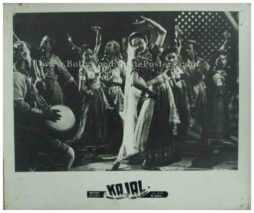 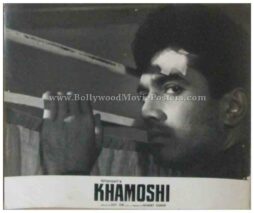 This is an actual surviving set comprising two old Bollywood lobby cards of the 1949 blockbuster hit that starred the Showman of Indian cinema Raj Kapoor and the ultimate method actor Dilip Kumar in lead roles.

Andaz is the only Bollywood movie that starred two of the greatest actors in Indian cinema, Raj Kapoor and Dilip Kumar together, making this set of lobby cards highly collectible!

Printed and circulated a few years after the first release of the film (early 1950s), this set of two old Bollywood black and white pictures was printed for publicity of the film inside a cinema hall. The four corners of each lobby card have been punched with ring holes to allow cinemas to pin them up on notice boards with ease.