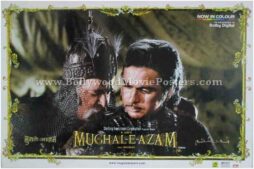 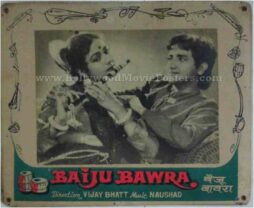 This is an actual surviving set of old Bollywood lobby cards of the 1956 Hindi film that featured the Showman of Indian cinema, Raj Kapoor in the lead role opposite Nargis.

Chori Chori was the last film that featured the hit pair of Nargis and Raj Kapoor together, making this old Bollywood still photo set highly collectible.

Printed and circulated somewhere in the late 1950s, this old Bollywood movie lobby card set was designed and printed for publicity of the film inside a cinema hall.

These beautiful black and white Bollywood still photos were actually used inside a theater that screened Chori Chori. The four corners of the lobby cards feature punched holes and display tell tale sings of being pinned on the notice board of a movie theater.