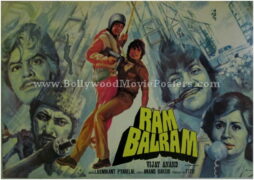 This is an actual surviving complete set of Devdas movie photos of the blockbuster 2002 Bollywood movie that starred the “King of Bollywood” Shah Rukh Khan in the lead role.

Directed by Sanjay Leela Bhansali, Devdas also starred Madhuri Dixit and Miss World 1994, Aishwarya Rai in key roles. Based on Sarat Chandra Chattopadhyay’s 1917 novel by the same name, Devdas is the third Hindi film to be made on the subject and the first to be made in color.

Printed and circulated during the first release of the film in 2002, this Devdas photo set was originally designed for publicity of the film but never ended up being used. Comprising ten original show cards, this photo set was printed to be used as pin ups on notice boards inside foyers of cinema halls.

Printed on thick stock photo paper for easy pin up display, this rare surviving set of original Devdas movie photos was actually issued to a cinema hall that screened the film in 2002, making it highly collectible!

Time Magazine selected Devdas as the best movie released in 2002 (worldwide) and subsequently also included it in its prestigious top 10 movies of the millennium worldwide, making these Devdas SRK photos, very sought after.

The film’s central character Devdas (Shah Rukh Khan), who essays the role of a wealthy law graduate (who later descends into alcoholism when his parents oppose his decision to marry his love interest) is seen in several key scenes from the film in this photo set. Paro (Aishwarya Rai) and the woman he turns to for solace, prostitute Chandramukhi (Madhuri Dixit Nene) are also seen in this rare set of Devdas movie photos.