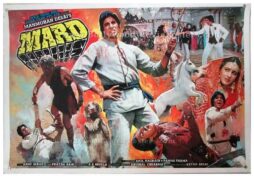 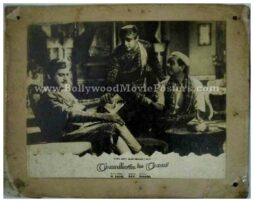 This is an actual surviving old Bollywood lobby card of the 1964 box office hit that featured the Elvis Presley of India, Shammi Kapoor in the lead role.

Printed and circulated during the original first release of the film (somewhere in the early 1960s), this old Bollywood movie still photo was printed for publicity of the film.

This beautiful vintage Bollywood movie lobby card was designed and printed for publicity of the film and was actually used inside a theater that screened Kashmir Ki Kali. The four corners of the lobby card feature punched holes and display visible pin hole markings – tell tale sings of being pinned on the notice board of a movie theater.

This old Bollywood movie lobby card was designed by taking a still photograph from the film and mounting it on a board. An iconic scene from the film Kashmir Ki Kali is captured in this old Bollywood movie still photo. Shammi Kapoor is seen with a very young Sharmila Tagore in the foreground while actor Pran is seen in a distance. The photograph has a beautiful vintage tint and is black and white except for the flowers, which appear in color.