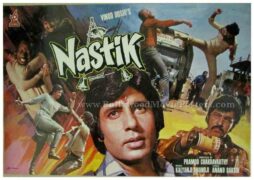 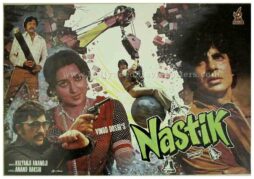 This is an actual surviving vintage Bollywood showcard of the 1983 film that starred the greatest superstar of Indian cinema, Amitabh Bachchan in the lead role.

This old hand painted Bollywood showcard features a stunning close up portrait of Amitabh Bachchan. Interestingly, his face has been painted in green. A smaller full length portrait of Amitabh appears alongside along with highly realistic portraits of Hema Malini and Pran.