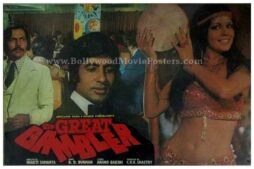 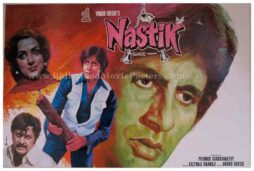 This old Bollywood showcard features an interesting collage of photographic stills and was originally designed by the greatest and most expensive Bollywood poster artist of all time, Diwakar Karkare, owner of Studio Diwakar. His printed signature is seen on the bottom left of this old Bollywood showcard. This old Amitabh showcard features still photos of several key scenes from the film.