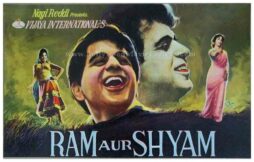 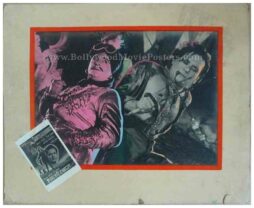 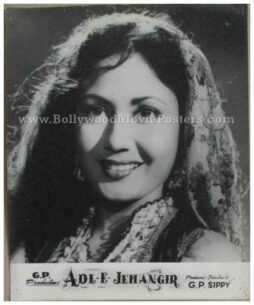 This is an actual surviving vintage Bollywood showcard of the 1967 film that featured Dilip Kumar in a double role for the first time.

Considered as the greatest method actor in Indian cinema and often labeled as “tragedy king,” Dilip Kumar considers his double role performance in Ram Aur Shyam to be the most memorable in his entire career.

Showcards were used as pin ups on notice boards inside foyers of cinema halls. Printed on photo paper, they were often mounted on cardboard to make them easy to display. This rare surviving showcard was actually issued to a cinema hall that screened the film Ram Aur Shyam, making it highly collectible!

This old Bollywood showcard features stunning hand painted artwork along with photographic stills. Large close up portraits of Dilip Kumar are seen prominently on the showcard, suggesting the dual role plot of the film.

Ram Aur Shyam (Ram And Shyam) is a 1967 blockbuster featuring the legendary method actor Dilip Kumar in his first double role ever. The film's cast included Pran, Waheeda Rehman, Mumtaz & Nirupa Roy. The original script of twin brothers who are separated at birth and later unite is said to be inspired from Alexandre Dumas' classic novel “The Corsican Brothers.” This film was one of the first trendsetting double role films of its time, which spawned dozens of similar movies revolving around twins in Indian cinema.