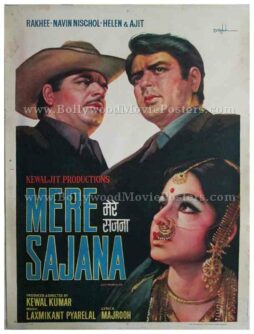 Stunning still photographs of the two leading ladies from the film are seen on either side of the poster. The lead protagonist is seen holding a pistol in a smaller photographic still in the center. The background is hand painted and features a cobweb prominently in the center, suggesting the theme of the film.