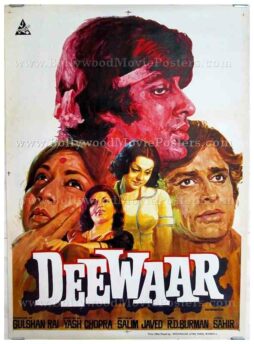 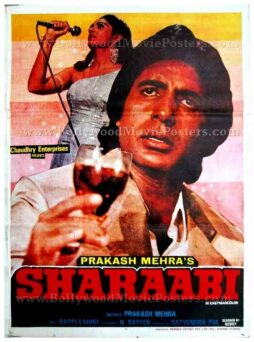 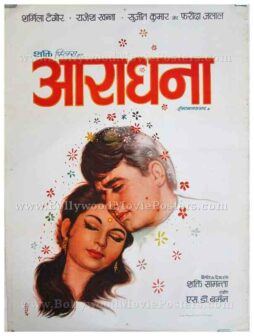 Spectacular hand painted vintage Bollywood movie poster of one of the greatest Hindi films in Indian cinema, Deewaar (1975) for sale.

This is an actual surviving first release poster of the 1975 action film that featured the biggest superstar of Indian cinema, Amitabh Bachchan. Deewaar (sometimes also spelled as Deewar) is considered one of the most iconic movies ever made in Bollywood and finds mention among the cult films of Indian cinema.

Printed and circulated during the first release of the film, this old Bollywood movie poster was originally designed for publicity of the film but never ended up being used.

Deewaar established superstar Amitabh Bachchan as the angry young man of Indian cinema. In the poster, artist Diwakar solidifies this by adapting a skilful technique to paint over Amitabh’s portrait using a knife. The knife overlay adds a degree of roughness and texture to Amitabh’s portrait, giving him a macho and angry look true to his character in the film. His face is painted in red to reflect his angry mood. The other characters of the film appear seamlessly intertwined together lending drama to this brilliantly hand painted old cinema poster.

Artist Diwakar Karkare’s original signature appears over the hand of actress Nirupa Roy’s portrait on the left of the poster.

The typography used in this poster is completely in English.