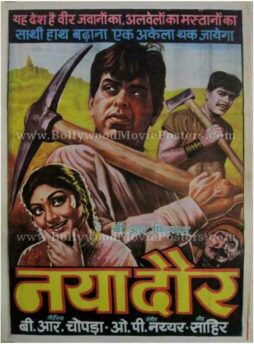 Very rare vintage six sheet poster of one of the greatest Bollywood movies ever made, Deewaar (1975) for sale.

This is an actual surviving old Bollywood movie poster of the 1975 action Hindi film that featured the biggest superstar of Indian cinema, Amitabh Bachchan in the lead role.

Deewaar (sometimes also spelled as Deewar) is considered one of the most iconic movies ever made in Indian cinema and finds mention among the cult films of Bollywood, making this very rare six sheet poster highly collectible!

Printed and circulated a few years after the first release of Deewaar (somewhere in the early 1980s), this Amitabh Bachchan old movie poster was intended for publicity of the film but never ended up being used.

This fabulous six sheet poster measures a stunning 120″x60″ inches (approx) in size when its six individual sheets are joined or pasted together. The poster comprises six separate single sheets, each measuring 40″x30″ inches. When pasted together they line up perfectly and together form one single six sheet poster. As shown in the photograph, there may be a slight gap visible between the six sheets – as the images have been photographed individually and then joined together digitally. When framed or pasted, there will be no gap visible between the six sheets and the appearance of the poster would be seamless – i.e. just like a single sheet poster.

The Deewaar old movie poster was originally designed by over painting a collage of still photographs by noted Bollywood poster artist C. Bakshi. His printed signature is seen on the bottom left corner of this Amitabh Bachchan movie poster.