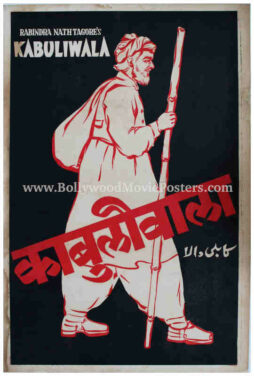 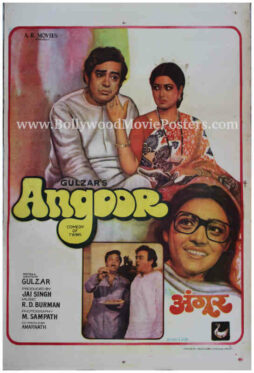 Hand drawn Bollywood poster of one of the finest films ever made in Hindi cinema, Kabuliwala (1961) for sale.

Directed by Hemen Gupta, Kabuliwala is a 1961 Hindi film based on a popular story penned by legendary Bengali writer Rabindranath Tagore.

Nobel prize winner Rabindranath Tagore was born in 1861 and the film’s release in 1961 was timed to coincide with his centenary. Kabuliwala was produced by one of the greatest filmmakers in the history of Indian cinema, Bimal Roy.

Printed and circulated during the first release run of the film (somewhere in the early 1960s), this incredibly rare hand painted Bollywood movie poster was printed for publicity of the film but never ended up being used.

Stunning hand drawn artwork is seen in this Kabuliwala poster. An artistic line drawn rendition of the lead character Balraj Sahni, who essays the role of the man from Kabul aka “Kabuliwala,” is seen in this poster. The red outlined figure stands out against a black background. The title of the movie appears in Devanagari Hindi in a stunning red font overlapping the illustrated figure in this Kabuliwala poster. A translation of the movie title is seen both in English as well as in Urdu in this hand painted Hindi movie poster.

Director Hemen Gupta was introduced to Indian cinema by none other than Netaji Subhas Chandra Bose, for whom he worked as secretary. For Kabuliwala, Hemen Gupta was awarded by the first Prime Minister of India, Jawaharlal Nehru. A patriotic song from the film, “Aye Mere Pyare Watan” sung by Manna Dey is fondly remembered and played till today.

This rare hand drawn Bollywood poster has been professionally restored and conserved by an expert paper archivist. It has been backed on cotton using a thorough acid-free conservation and restoration process and comes with a preservation guarantee.