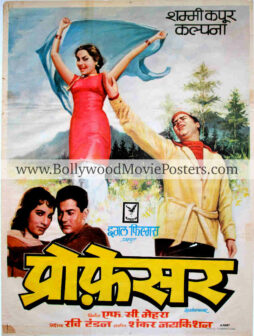 This is an actual surviving Bollywood poster of the 1962 Hindi film that featured the “Elvis Presley of India,” Shammi Kapoor in the lead role opposite actress Kalpana. Produced by F. C. Mehra and directed by Lekh Tandon, Professor also starred Salim Khan, Tun Tun, Randhir and Lalita Pawar in supporting roles.

Printed and circulated during the screening of the film in theaters (somewhere in the 1960s), this old Professor poster was originally designed for publicity of the film but never ended up being used.

This Bollywood poster was originally hand painted on canvas by a poster design studio in Mumbai called A.P. Art. It features a stunning hand painted close up portrait of Shammi Kapoor wearing a fake beard, dressed as an old professor. Actress Kalpana appears in a dancing pose alongside in this Bollywood poster. The poster is set against a picturesque mountain background. The title of the film appears in a striking yellow font encased in red in Devanagari Hindi script at the bottom.

The soundtrack album of Professor was composed by ace music director duo Shankar-Jaikishan. The film was remade in Tamil as Nadigan (1990), in Telugu twice as Bhale Mastaru (1969) and again as Peddinti Alludu (1991); and in Kannada as Gopi Krishna. The rights to Professor are owned by Shah Rukh Khan’s Red Chillies Entertainment.