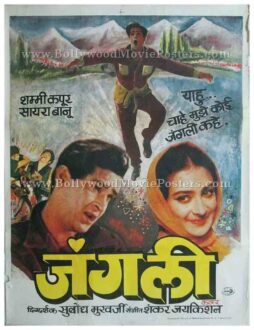 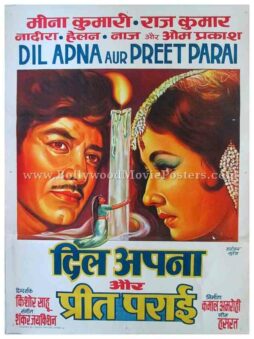 This is an actual surviving original vintage Bollywood movie poster of the 1962 Hindi film that featured the “Elvis Presley of India,” Shammi Kapoor in the lead role opposite actress Kalpana.

Printed and circulated somewhere during the first release run of the film (early 1960s), this old Bollywood movie poster was originally designed for publicity of the film but never ended up being used.

This old Bollywood movie poster was originally hand painted on canvas by a leading poster design studio in Bombay. A fabulous hand painted portrait of Shammi Kapoor (taken from an iconic scene in the film) is seen prominently on the poster. A smaller quirky portrait of actress Kalpana appears at the bottom. The poster is set against an orange red background. The printed signature of Bollywood poster painter Vishnu is seen on the bottom right hand corner of this old Bollywood poster.