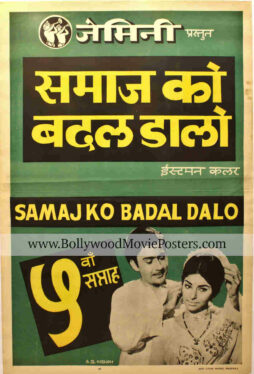 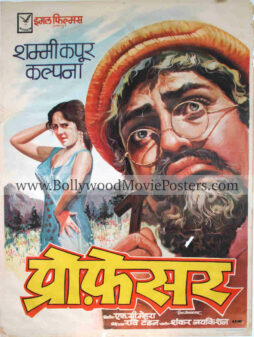 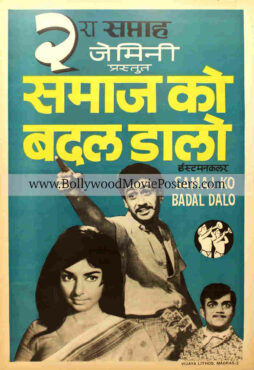 This is an actual surviving original Bollywood movie poster of the 1970 Hindi film that starred Parikshat Sahni, Sharada, Aruna Irani, Mukri and Mehmood. Produced by Gemini pictures and directed by V. Madhusudhan Rao, Samaj Ko Badal Dalo was a remake of the Malayalam film Thulabharam (1968).

Printed and circulated during the milestone 5th week run of the film in the early 1970s, this old Black and white Bollywood movie poster was printed for publicity of the film but never ended up being used.

This original Samaj Ko Badal Dalo poster features a black and white photo still of the lead couple Parikshat Sahni and Sharada. Set against a single colored green background, lettering appears in stunning yellow typography in both Devanagari Hindi as well as in English. The iconic Gemini pictures “trumpets” logo is seen prominently on the top of this Black and white Bollywood movie poster. The words “Eastman Color” appear at the center and the milestone “5th Week” stamp is seen on the bottom left.